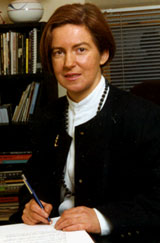 Part of an initiative which has the blessing of the Holy Father, the priests and people of the Diocese gather as one key component of a ’24 hours international event’ involving shrines and grottoes across the global Catholic family in 46 countries.

The focus of the gathering is ‘prayer for priests.’

This initiative – begun in 2009 – has gathered strength year on year. Across all continents, the full list of times and venues for the 24 hours is available on www.worldpriest.com

The initiative is the brainchild of Wexford native Marion Mulhall – (see BIOPIC below) – and it enjoys the blessing of the Holy Father and the universal Church.

People across the diocese are asked to come to Our Lady’s Island for 7.30 pm. Bishop Brennan will attend as will the priests and people of the diocese.

The prayer – which is lay led – will begin at 8pm – and will be broadcast on South East Radio live. The prayers will last for 30 minutes. It will be preceded by Cardigan in Wales and will be taken up by fellow believers at ‘The Grotto’ in Portland Oregan (USA).

Plans have been finalised to film the event and to make it available on YouTube and webcam.

Marion Mulhall was born in Enniscorthy Co.Wexford, grew up in County Wicklow. She was a successful business entrepreneur in advertising for some 25 years who embarked on a mission some 12 years ago following an inspiration of vocation at a retreat led by Father Kevin Scallon. The fruits of this vocation are producing a rich harvest of prayerful support and affirmation to priests worldwide through the utilisation of the communications media.

Marion is the Founder/CEO of Worldpriest a lay organisation of professional communications people formed in 2003 to ‘’Affirm the dignity, beauty and gift of the Priesthood of Jesus Christ to Humanity”.

She is the inspiration behind worldpriestday.com which she formed in response to Saint John Paul’s announcement in June 2002 of a World Day of Prayer for the Sanctification of Priests to be held annually on the feast of the Sacred Heart of Jesus. Our motto is “To pray, to unite, to intercede for our priests through Mary.”

Marion and her team are the developers and the inspiration behind the hugely successful Annual Global Rosary Relay for Priests now in its fifth year. Our motto is ‘’Pray the Rosary, unite with your Country and help encircle the world in prayer’’.

Marion has appeared on international television programmes including EWTN’s Live in Alabama USA. She has addressed the USA Bishops’ Conference, the International Institute for Ongoing Clergy Formation at Seton Hall University USA and many other prestigious gathering globally sharing her life’s passion and mission of supporting our Priests who serve us in Christ’s name.