As a result of the Penal Laws, Irish students for the priesthood had to go to colleges on the continent of Europe for their education.  Relaxation of the repressive laws regarding Catholic education began with the passing of Acts of Parliamen

t in 1782, 1792 and 1793, and in that last-mentioned year St Patrick’s College in Carlow was established.  St Kieran’s College, Kilkenny, was opened about that time also.  Two years later, St Patrick’s College, Maynooth, was founded, and a number of other colleges followed, including St John’s Waterford, in 1807.

In 1811 Bishop Patrick Ryan established a school for boys, known as the “Roman Catholic Seminary”, at Michael Street, Wexford.  In 1819, this school was transferred to Summerhill and was renamed St Peter’s College.

As time went on, students intending to go for the priesthood did some of their studies in St Peter’s before going on to Maynooth or Carlow.  By 1835 it was stated that “should the wants of the diocese require it, a course of theology is available to supersede the necessity of students finishing their education at Maynooth”.  It appears, however, that theology was not studied in the college until Dr Thomas Furlong, who had been professor of Moral Theology and other disciplines in Maynooth, was appointed Bishop of Ferns in 1857 and came to live in St Peter’s but, even then, a full course was not catered for.  This did not come about until about 1895, and the first class to have completed their full course of philosophy and theology here were ordained in 1901.

Ecclesiastical students were accommodated in the rooms in St Aidan’s building, built in 1879, and when numbers increased the senior theologians occupied Summerhill House (now the Bishop’s residence).  When Dr William Codd became bishop in 1918, he came to live in Summerhill House and the house known as St Mary’s, until then the bishop’s house, was made available for the students. 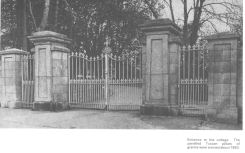 In the early years, the number of clerical students was not large.  For instance, in 1903 there were only twelve in the divinity classes and six in philosophy.  In the secondary school that same year there were thirty-four boarders and thirty-seven day pupils.  Over the next three decades the numbers increased steadily and the necessity for extra accommodation became pressing.  The erection of a new seminary building began in 1935.  It was completed in 1938, during the episcopacy of Bishop Codd.  At the same time a new refectory, catering for the whole student body, lay and clerical, was built on the site of the old Physics Hall. The original refectory was converted into the present Staff Room and adjoining classroom. 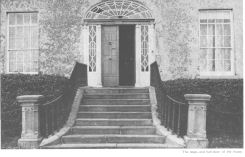 Students were ordained in St Peter’s for the Diocese of Ferns, but also for other Irish Dioceses and for Dioceses in Britain, the United States, and Australasia.  With the outbreak of World War II in 1939, Irish students in France could not continue their studies there, and three students belonging to the Diocese of Beauvais completed their course and were ordained in St Peter’s.

With the drastic fall in the number of vocations, St Peter’s Seminary was forced to close in 1999.  Students for the priesthood are now educated at St Patrick’s College, Maynooth.

The lay school has continued to thrive and at present has a student population of about seven hundred.