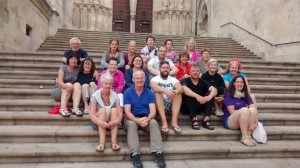 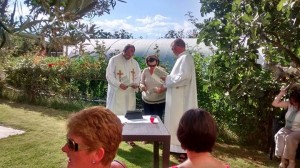 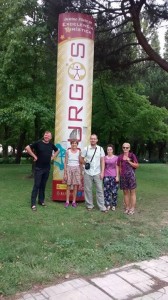 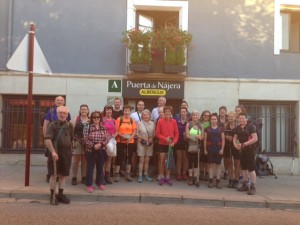 “Empty your rucksack; you are carrying too much weight.

Empty your interior; leave what exceeds you, leave behind the appearances, the fronts that minimize you…and discover the greatness that exists in you. Leave aside what you have to love who you are. Empty your interior room; only in the opened spaces you will feel the Breeze; only in the echo of the silence you will listen to the Word.”

This is what 21 people from Ireland did as they joined the Ferns Diocesan Pilgrimage on the Camino de Santiago from Los Arcos to Burgos on the 16th of August. This was the second year of the Ferns pilgrimage on the Camino. Fr. Roger O’Neill (New Ross) and Fr. James Cullen (Wexford Parish) lead a group from St. Jean Pied de Port to Los Arcos last year and the journey was resumed this year as they furthered their path along the way to Santiago.  A total distance of approximately 160km was covered.

The pilgrims encountered obstacles and challenges like all pilgrimages do. From the breakdown of our transfer bus; which led to the initial bonding of the group, to the blisters and sores we encountered along the way. These events made us aware of our interdependence and gratitude of our fellow pilgrims on the way, many of which helped, encouraged and became part of our journey. On our first night in Los Arcos we were fortunate to enjoy a meal of fine Spanish origins together as a group. This meal set the tone for the rest of the journey across the north of Spain.

Setting out in the fresh early hours of the morning became habit. Finding our own pace became natural. Greeting fellow pilgrims with “Buen Camino” became instinct. Daily mass and pilgrim prayer along with individual prayers or praying in small groups helped us with our daily unpacking of our interior rucksack. We crossed the vast dry landscape that adorned the Spanish countryside in 30 degree heat for 6 days, learning to become grateful of cloud cover and shade. As we walked we met people from different countries and walks of life. A couple from Australia became our camino neighbours as we met them everyday and developed a great friendship with them, other pilgrims we met came from French, German, Korean, Canada, America and Spain.

The Spanish culture of celebration in faith, music and food was a huge part of our journey. We witnessed the local religious festivals celebrated in small villages such as Los Arcos and Ages. The celebration of the Madonna and locally adored saints was characterised by processions of statues and cheerful singing which continued right throughout the night. The Spanish omelet known as Tortilla de patatas was a welcomed sight by all. This potato and herb filled omelette was a source of much needed energy along the path. In the evenings the Menu de Peregrino (Pilgrim’s Menu) which consisted of paellas, chorizo stew, mixed salads and bread, local fish and meat dishes with the local Rioja sauce was the fuel for our walking. Bunk beds of all shapes and sizes were our resting places in the local Albergues (Hostels), where people found comfort even in the most uncomfortable surroundings.

On the final day when all pilgrims arrived into our campsite in the surroundings of Burgos there was a sense of achievement of what had been complete, appreciation for what had happened and a sense of fullness in heart. WE MADE IT! Our celebrations, thanksgiving and petitions were offered up at the cathedral in Burgos where we celebrated mass that evening.

As we slip back into our hectic lives at home in Ireland in anticipation of next years pilgrimage we will try and remember to empty our rucksacks, as we are carrying too much weight. 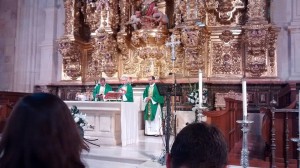 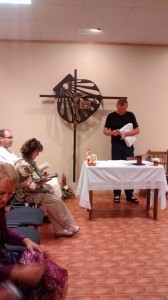 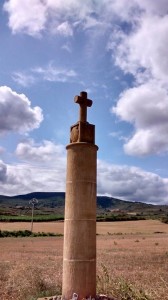