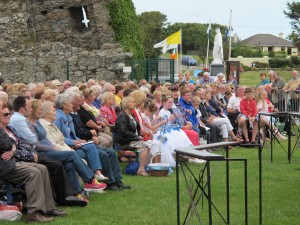 Pilgrims pictured at Our Lady’s Island on Friday 15th August last for the official opening of the Pilgrimage. 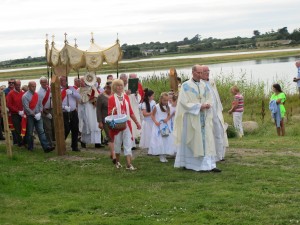 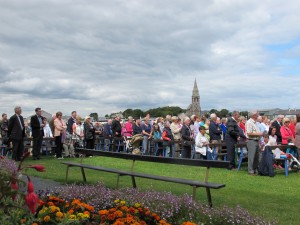 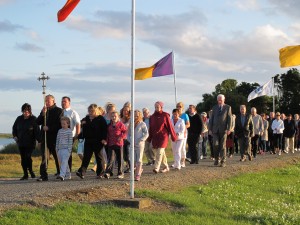 Pilgrims at the Blessed Sacrament Procession 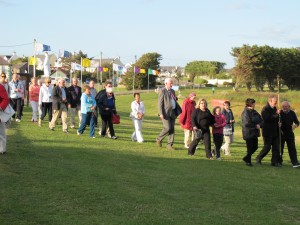 Pilgrims at the Blessed Sacrament Procession

Over the centuries, right from the beginning there has been a great tendency in the church to divinise Jesus and thereby lose sight of his humanity, of the fact that he was a human person we could have met on the roads of Palestine about two thousand years ago. What was true of Jesus was also true for Mary– the same tendency to remove her from the realm of ordinary people like ourselves. We pray to her as “Holy Mary” and sing to her as “Queen of Heaven” or speak of her as “The Blessed Virgin”, but often we lose sight of her real humanity. When she appears on the scene in the gospels she was a teenager, a young girl betrothed or engaged to an older man, called Joseph embarking on his second marriage and who seems to have had a number of children of his own. (That appears to be the best way to account for the brothers and sisters of Jesus referred to in the Gospels so frequently.)

​Mary was an ordinary person who became remarkable because of her faith, her response to the call of God and her closeness to her Son. In the message of the angel she recognised the hand of God and made what can only be described as a great act of faith. I will give you the literal translation. “Behold the servant of the Lord; may it be unto me according to your word.”These are words that need some unpacking. Mary is the servant or handmaid of the Lord. She places herself at his disposal to carry out the mission and task entrusted to her. She makes a great act of faith. There was a famous philosopher, Kirkegaard, who stated that faith was “a leap in the dark”. I do not believe that that is fully true. There is always some light in an act of faith. A couple who marry do not know everything about each other, but still theyknow enough to enable them to say that vital “yes” to each other, to make an act of faith in each other, to entrust their lives mutually to each other. Something similar was true for Mary. She had a deep sense of God which would have come from her upbringing and from the history of belief in God among the people of God in her neighbourhood. She had some sense that God was at work in her call to be the mother of His Son. Still, there was a great deal of darkness. What does being the mother of the Son of God entail? What will his future be? What will my future be? What am I getting into here? It may mean serious headaches for the future. There is much darkness. Despite the uncertainty Mary gave herself generously and fully to that future. This is the core of her faith. Her cousin, Elizabeth commends here for her remarkable faith. “Blessed is she who believed that the promise made here by the Lord would be fulfilled.” St John Paul in his Encyclical Letter, “Mary, Mother of the Redeemer”, in 1987gives a great description of Mary’s faith. “Indeed, at the Annunciation Mary entrusted herself to God completely, with “the full submission of intellect and will” manifesting the “obedience of faith” to him who spoke to her through the messenger. She responded, therefore, with all her human and feminine “I” (or Ego) and this response of faith included perfect cooperation with the grace of God that precedes and assists, and perfect openness to the action of the Holy Spirit, who constantly brings faith to completion by his gifts.” Again he says, “In faith she entrusted herself to God without reserve and devoted herself as the handmaid of the Lord to the person and work of her Son.”

​St. John Paul has a great sense of what real faith entails. It means to give yourself wholeheartedly to another. It is not confined to religious faith. When a couple say “Yes” to each other on their wedding day, they are saying many things which run something like this —“I trust you, I find you reliable, you are trustworthy and so I can give myself to you for the rest of my life. Not alone do I trust you, but I entrust myself to you, I commit myself to you for the remainder of my time in this world.” When we encounter the Love of God we say “Yes” to Him. What I am saying is “I believe in you, or better, into you, I entrust and direct my whole life towards you during my time in this world. Mary was the great model of faith like this, as St. John Paulclearly points out. In a way her faith, her commitment had a double object, she gave herself to God and his basic plan for our salvation. She also gave herself fully and wholeheartedly to her Son from his birth to his execution on the Cross.

​Mary’s devotion to her Son began at his birth. She had to suffer the inconvenience of moving out of the living quarters of the house to give birth to Jesus in an animal shed. She wrapped him in swaddling clothes to ensure that his little body would develop correctly. When he got lost on his first Festival journey to Jerusalem Joseph and herself searched tirelessly for three days until they found him in the temple, “sitting among the teachers listening to them and asking them questions”. Jesus replied to them, “Do you not know that I must be in my Father’s house?” But they did not understand his answer. Mary stored all these things in her heart trying to comprehend what Jesus was about.

​It is probable that Jesus public ministry caused Mary most concern and anxiety. His relatives at one point thought that he was out of his mind. Despite the anxiety she took an active interest in his public ministry. On one occasion we are told “His mother and his brothers came looking for him but they could not get to him because of the crowd. He was told, ‘Your mother and your brothers are standing outside and want to see you.’ But he said in answer, ‘My mother and my brothers are those who hear the word of God and put it into practice.’ His new family are those who hear the word of God and allow it to influence how they live. Mary already belonged to that family as one who exclaimed, “Be it done unto me according to your word.”

​At the wedding of Cana we find that Mary was very much in tune with her Son. She got a very strange answer when she reminded him that the wine had run short. But still she instructed the servants, “Do whatever he tells you.” He went on to change water into wine that was away superior to what went before. Mary was instrumental in reminding us that what Jesus had to offer us, offer mankind, was far superior to what had gone before. In fact, nothing better has arrived on the scene since.

​After Cana we get another glimpse of how close to Jesus Mary was during his public life. “After this he went down to Capernaum with his mother and his brothers and his disciples, but they stayed there only a few days.” Mary was committed to her Son right down to the bitter end. She saw the opposition building up to him. She fretted and worried for his safety. Simeon told her that he would be a sign of contradiction, “destined for the fall and rise of many in Israel”. He also alerted Mary to her own sorrow. “A sword shall pierce you soul too.” That moment came as Jesus struggled for his last breath on the cross when he handed Mary over to the care of his beloved disciple, John.

​It is very clear from that brief outline that Mary was very close to and committed to Jesus right to the end o of his life. But she was also interested in the outcome of his work. As the apostles prepared with constant prayer for the coming of the Spirit in the upper room Mary joined them along with her step children, described as “his brothers”.

​Mary was Jesus’ first and probably greatest disciple. She learned from him during his hidden years and kept close to him during his public ministry. That is the path we are all called to follow. The better we do so the more likely it is that we will give new life to the church, drink the best wine of Jesus’ gift and legacy to us and attract new disciples to embrace his way of life.

​Pope Francis calls on everybody to go forth and live their faith commitment by making disciples of all nations. He says, “The word of Godconstantly shows us how God challenges those who believe in him to go forth.” “All of us are called” he says, “to take part in the new missionary going forth. Each Christian and every community must discern the path that they Lord points out, but all of us are asked to obey his call to go forth from our own comfort zone in order to reach all the peripheries in need of the light of the Gospel……………..  The drive to go forth and give, to go out from ourselves, to keep pressing forward in our sowing of the good seed remains ever present.” Pope Francis’ ambition is that not only do we believe, but that we bring our faith and the good news of the Gospel beyond ourselves

​Mary came out of her comfort zone to give Jesus to the world. We are called to do the same in this our 21st century after his original appearance.