Ministering together in a New Time

Bishop Ger and the clergy of the Diocese gathered last week to take time away to hold discussions on how they  will minister as priests together in a changing world.  The theme of the gathering was “Ministering in a New Time”.  Over the course of a couple of days they  participated in workshops and held many discussions, all of which focused on how life in the church is changing.  This led to looking ahead to what church life and and ministry might be like in the future.

At our gathering I shared the following vision with the clergy which I now share with you all:

“That the people of The Diocese of Ferns have access to the transformational power of the Gospel, the hope that it brings and the seal on that by the sacramental life of the church.”

This gathering was the first step in a process that will be further developed over the coming months and years and will draw on the resources and gifts of many people throughout our diocese. As was remarked by one of our facilitators “this process is about widening the circle to involve as many people as possible and benefit from the richness of their talents and abilities.”

I thank all  who participated in this initial process and I look forward to continuing this journey with you all throughout the diocese.

As our three day gathering drew to a close on Wednesday, I was asked by the facilitators, Judith and Maria, if I would consider giving the priests present, a statement of what my vision for the Diocese would be. They felt that the feedback and the work done in the previous two days had surfaced the desire on behalf of the priests for such a statement.

I began by outlining my concerns in relation to any vision statement. I stated my hope that any outlining of a vision would be something which would be flexible and oriented to allow future development. I expressed my concern at the outset that anything I would say would be something that empowers people and is not a vision that binds us into a certain direction, irrespective of what we would learn while on the journey.

I offer the following Mission statement to the priests and to the people and the parishes of the Diocese of Ferns.

“My vision is that the all the people of the Diocese of Ferns would have access to the transformative power of the Gospel, the hope that it brings and the seal on that hope through the Sacramental life of the Church”

While setting out this vision, I am very aware that as a Church we have been Sacramentalised but not Evangelised and the work of the future is to be evangelisers, to draw people into relationship with Christ and to move, in the words of Pope Francis, “from Maintenance to Mission”

I see my own role as Bishop as a servant to that vision, to go where it leads me and to devote my energy into making it a reality in each of the 49 parishes or 96 church communities which make up the Diocese.

I would out line two tasks which are of equal importance in our work in the years ahead.

The sustaining of each of our Christian Communities will entail the maximizing of the energy available in each community through training of lay people to take up roles of leadership in liturgy, administration and pastoral care and to continue to promote a church ethos which will encourage vocations to priesthood and religious life.  In discussions which followed my presentation there was some discussion about where vocations will come from in the future and, while most priests now in ministry experience a positive culture of vocations in the home, this is no longer the reality for young people. The task then seems to be for us to find an alternative source of that culture and this I think will only come from the deepening of local Christian community .

In relation to how we work and live as priests in the future, I offered the following initial proposals as to how our work might look like in the years ahead

The themes above are outlines of what might be possible but they will take a different shape in different parts of the Diocese, depending on the rural/urban reality or the reality of the different ages and skills of the priests available. But what is certain, is that we need to begin the journey from Lone Ranger to Team Player, not just because it is in a vision statement but because it is to only way that our health and wellbeing at a physical and vocational level will be sustained.

I proposed to the gathering that our care for priests should also take in two elements.

The care for older priests living in the community by setting up a part time nursing post, similar to what is happening in other Dioceses and the signing up to a trauma support system for priests when they are involved in traumatic situations such as accidents or suicides.  At the moment, the only attendee at a trauma scene who does not receive subsequent trauma support is the priest.

I also outlined my intentions to hold a series of meetings throughout October, with the Principals and current Chairs of Boards of our Primary schools with the intention of transitioning from Priest Chairs to Lay chairs when the next change of Boards happens in November 2023.

As priests get fewer in number in the Diocese and as the workload changes, it will also be necessary to look at how priests are paid and, as parishes in an area are served by a team of priests, to ensure that there is equity in how priests are funded.

One of the concerns that was raised throughout the three days was the necessity of support for priests and parishes in a time of transition and I think this concern has to be taken very seriously. If we had unlimited resources it would be possible to recruit trained pastoral workers to support this transition but we are not in that position. As resources are scarce, I propose that I will make it the principal task of my ministry to work on that change. But scarce resources also suggest that we need to implement change area by area so that parishes, priests and people who are engaging in change are adequately supported. 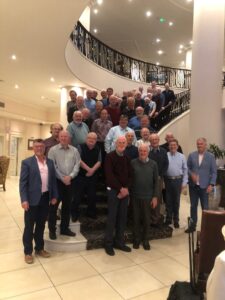