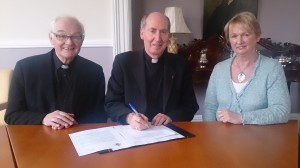 I am writing to you on behalf of Accord, which is the diocesan agency that provides Marriage Counselling and presents Pre-Marriage Courses to couples in the diocese before marriage. Accord has asked me to contact you about two pastoral matters of concern to them.

1. Facilitators for Accord Pre-Marriage Courses needed

At present, Accord has only three volunteers who do the very important work of presenting Pre-Marriage Courses (PMC) in our diocese. There are six and sometimes seven such courses here each year. Accord feels they need a greater number of facilitators, men and women, to present these courses, so as to lighten the load on the present three presenters and also to give the new presenters the opportunity to give their own unique personal interpretation and flavour to the material that is presented in – and is common – to all Accord courses.

To recruit such extra volunteers I ask you (and the priests in the other parishes of the diocese) to suggest to Accord a person or persons in your parish who might be suitable for the role of presenter of these PMCs.  There will, of course, be a selection process. Those who are then selected will be required to do a year’s course of training before they will begin the important pastoral work of presenting an Accord course.

I hope that you will give Accord a much-needed hand by suggesting a person or persons from your parish for this important ministry in – and for – our diocese. A poster for your church porch is included herewith.

2. Recommending Accord PMCs to couples in your parish.

As you will see from the other enclosed document, only just over 20% of couples who marry in the churches of this diocese each year do an Accord PMC before getting married. This, you will agree, is unacceptably low, especially in view of the fundamental importance we all attach to marriage for our church community and for the welfare of our society.

Because of this situation Accord feels it is necessary to ask you to do all you can to urge the couples who come to you to get married in the church(es) of your parish to do an Accord course before their wedding day. We know, of course, that doing such a course is not legally obligatory in this diocese but at the same time you will agree that the priests in our parishes are very well placed to impress on these young couples the value and benefits of doing an Accord PMC. The accompanying pages will make clear the high quality of these Courses and the issues that can be overlooked by couples before they marry with perhaps serious consequences later.

I thank you in anticipation for your attention and good work in regard to these two pastorally significant matters which I have outlined in this letter.

A Pastoral Resource we must commend to our people

(1) Attendance at our Pre-Marriage Courses in recent years


In relation to these Pre-Marriage Courses (PMC) there is some good news and some bad news.

The good news is that the six PMCs put on every year by Accord are going very well and the feedback from the couples who do them is very good and very positive as will be clear from the comments on the next page.
The bad news, however, is clear from the above figures, especially the percentages.  The main statistic and a very disappointing one is that in the years mentioned above only about 11% – 15% of Catholic couples who marry in this Diocese have done an Accord PMC. There has been a big decline in these numbers since 2006, despite a slight rise in the last two years.

We all know how fundamental marriage is for the Church and for society. So we are now being asked to make an even greater effort to encourage young couples to go to an Accord PMC as a distinct help to their marriage relationship. This is the purpose of the present document. In particular we ask you, the priests and pastors of the Diocese, to do all you can to further this very important aim.

(2) Feedback from couples on Accord PMCs

The following are some of the comments made by couples who have recently done an Accord PMC.

(3) Ten Topics couples don’t want to talk about before marriage
Marriage Care – the British equivalent of Accord – interviewed 500 of its counsellors some few years ago and the following were the ten topics in question here: