On Sunday 26th April, Bishop Denis Brennan, Chair of the Episcopal Commission for Vocations was Chief Celebrant at Mass on RTE for Vocation Sunday. 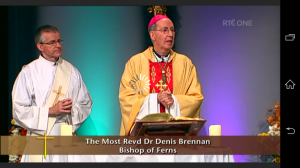 I heard a story on radio during the week. A woman rang into a talk programme. Her story was a very familiar one. She had been raised a Catholic, but she doesn’t attend church anymore.

She went on to explain why she had moved away from the church and made it plain that she had no intention of going back.

However, all was not well with her. She said that there was something missing in her life, an opportunity to experience ritual, and to think of something greater than herself, a feeling of belonging, a sense of community, the feeling that comes from being part of a group of like-minded people.

The word that she kept coming back to was the word’ gap.’ She felt that there was a gap in her life, she didn’t feel connected in ways that mattered to her and nourished her spirit.

Listening to that woman very honestly describing her position I instinctively thought of the role of the priest in the Christian community.

In theological language the priest is described as the mediator between God and humankind. Perhaps it might be more helpful to see him as’ the man in the gap.’

The person who tries to bridge the gap between believers and what they believe in—God—or in the words of the woman on the radio, something greater than ourselves.

Sometimes we priests do that well, occasionally we do it magnificently, sometimes we do it appallingly badly.

Be that as it may, from the Christian perspective it is vitally important that it be done, that there are people who spend their lives helping to bridge the gap between the human and divine.

On this Vocations Sunday I would like to acknowledge and thank the many priests who do this day in and day out all over Ireland. Thank you for what you do, for what you are.

In this Year of Consecrated Life I would also like to affirm our Religious brothers and sisters. Your commitment, enthusiasm and dedication are a matter of record, people know and appreciate what you have done and continue to do.

I thank you for your presence and your witness. At times perhaps we take it for granted, it may be that, like so many things in life, it is only fully appreciated in retrospect.

The Holy Father asks us to do three things in this Year of Consecrated Life;

Looking to the past should not be in the words of the Holy Father” an exercise in archaeology” but an opportunity to give thanks for a journey which for all its lights and shadows, has been a time of grace, marked by the presence of the spirit.’

Speaking about living in the present with enthusiasm Pope Francis quotes the old saying ” where there are religious, there is joy.” He goes on to say” none of us should be dour, discontented and dissatisfied, for a gloomy disciple is a disciple of gloom.”

Like everyone else he says we have our troubles, our dark nights of the soul, our disappointments and infirmities, our experience of slowing down as we grow older.

But it’s here the Holy Father says” we learn to recognise the face of Christ………….. who did not refuse the sufferings of the Cross.”

Thirdly, he asks us to embrace the future with hope, whatever that future may hold or mean. This is the hope which does not disappoint, it is not based on statistics or accomplishments but on the One for whom’ nothing is impossible.’

A vocation is fundamentally an affair of the heart and to anyone discerning a vocation at this time, I would like to offer the words of the late Steve Jobs.

Speaking to young people graduating from Stanford University in 2005 he said;

Your time is limited….. don’t waste it living someone else’s dream…

Glory be to the Father, and to the Son, and to the Holy Spirit, as it was in the beginning, is now, and ever shall be, world without end. Amen.

The broadcast is available on RTE player at the following link (for a period of 21 days after initial broadcast.)